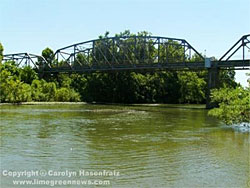 Here is a press release about an endangered historic bridge on Route 66 in Missouri:

“Hazelgreen, MO: Route 66 enthusiasts from all over the world will gather at 3:00 p.m. at the west end of the Gasconade River Bridge near Hazelgreen, MO on Saturday, March 14 to voice their support for a Missouri Route 66 and Ozarks icon, that being the bridge across the Gasconade River in Laclede County, Missouri. This ever-growing group of organizations and concerned individuals has worked tirelessly to save this bridge, including, at this point, seeking to have the bridge placed on the National Register of Historic Places. Over 200 people are expected to attend the rally. Having recently received notification that the bridge is indeed eligible for inclusion in the National Register of Historic Places, the Lebanon-Laclede County Route 66 Society (LL66), a 501(c)3 nonprofit, has come forward as this group’s supporting organization moving forward.

Following the 3:00 p.m. rally, attendees will meet with other activists, historic preservationists, members of the Route 66 Association of Missouri, Laclede County Government Officials and officials from the state to discuss the Gasconade River Bridge and what can be done to save this historic structure. This meeting will be held at 5:00 p.m. at the Lebanon-Laclede County Library, located at 915 S. Jefferson St. Everyone with questions, specific interests, or desired involvement in the bridge is welcome to attend. The intent of the meeting is to discuss plans of action, forming of a committee, and discussion of any developments or findings since the last rally in December 2014.

View video on YouTube: Help Save a Route 66 Landmark! MoDOT closed the Gasconade Bridge in Missouri

Despite the fact that it was relatively short-lived as a highway, US Highway 66 (Route 66) is, without a doubt, the most famous road in America. It is important in the history of US transportation as the first national highway linking Chicago and Los Angeles, but its significance in American history is much more far-reaching. Route 66 is symbolic of the major changes in American life during the first half of the 20th Century. These changes included the proliferation of automobiles, the development of roadside culture, and the westward migration of Americans during the depression and post-war years. However, more than anything else, Route 66, the Main Street of America, the Mother Road, has become an icon of progress, hope, opportunity and adventure in America.

One of the reasons Route 66 is such a strong visual and physical experience is because of the way it was designed and engineered. Unlike new interstate highways, which are more efficient and meant to handle thousands of cars at high speeds, Route 66 has a more human scale, and as a result, people feel more physically connected to it. It is narrower, tends to have grassy shoulders (which means less pavement) and motorists can drive it more slowly without slowing the flow of traffic. As a result, the landscape unfolds instead of whisks past.

Scenic Byway Routes like Missouri Route 66 have value not only for aesthetics and preservation, but also as a way to promote desirable forms of tourism and increase income in regions. Foreign and domestic tourists alike are interested in visiting the various points of interest, and the natural wonders of the physical and cultural environment offered along the Missouri Route 66 Corridor. Economic development opportunities in the Laclede County Route 66 Corridor are greatly based on corridor travel experience, as well as land uses and infill opportunities in the various communities.

Intact bridges may be contributing features of large historic landscapes, or may be considered as individual resources. Intact bridges and individual sections of roadway may be representative of early engineering, workmanship and changes in road-building techniques during the period of significance, and of common patterns of use. These resources are important as tangible links with specific events and emerging technologies, such as completion of the first stretch of 4-lane highway Route 66 in Missouri, as well as for their overall role in the development of the highway system. The presence of intact historic roadways and bridges can also serve to strengthen connections between other types of resources, such as landscapes and groups of buildings.

The Gasconade River Bridge is significant because of its actual experience of the road, the kinesthetic experience that is dependent upon a sense of place created by intact landscapes as a contributing property along Route 66.

The Gasconade River Bridge has the ability to evoke a sense of place and experience. This historic structure, dating to 1924, is fully intact and reflects its period of significance, making it a perfect candidate for the National Register of Historic Places. The goal of this group of concerned citizens, passionate Route 66 enthusiasts/preservationists is to ensure the restoration and preservation of this historic Route 66 Bridge.

“This bridge personifies Route 66 through the Ozark region,” states Roamin’ Rich Dinkela. “Even if you’ve never heard of Route 66 you know when you see this bridge that you’re seeing a living part of history. Much like the Chain of Rocks Bridge in St. Louis, this structure reels in people from all over the world. I know it sounds crazy, but people young and old have a hunger for history. What will they learn about if this bridge and others like it are replaced with homogenized, sterilized, lifeless concrete structures? Nothing! They’ll see it in a book and wish they could have experienced it. As they thirst for more knowledge about our historical byways, they will gravitate toward the regions that make preservation a priority. We can do this; we can save this bridge.”

Tens of thousands of tourists, mostly traveling abroad from other continents, descend upon the Mother Road ANNUALLY to live and experience the past. To these tourists, it’s the dream of a lifetime. Replacing the bridge with a modern structure would alter the canvas of Route 66 through the Ozarks, consequently interrupting that dream. According to a Rutgers University study released in 2012, more than 5 million people live and work along Route 66, more than 85% of Route 66 tourists visit historic places and spend over $38 million a year in Route 66 communities! Route 66 tourism boasts annual gains of $262 million in overall output. Our historic landmarks and pieces of infrastructure such as the Gasconade River Bridge should be kept available for tourists to experience.

Samples of testimony from around the world:

Anja and Wolfgang Werz (Germany): “Several thousand tourists from Germany traveled each year the Route 66 from Chicago to Santa Monica. An important reason for them is to ride on the trail of American history, including historic bridges such as the Gasconade River near Hazelgreen, MO. If all the historic attractions of Route 66 are gradually removed, it is for the tourists no longer interesting to come to the U.S. and travel The Route 66.”

Monique and Willem Bor (Netherlands): “Many tourists from the Netherlands like to drive the Route 66 and see all the old buildings, bridges and stretches off Route 66. Please be careful with the remaining attractions because else tourist will no longer be interested in Route 66. Lately many old motels are disappearing, they were demolished or they burned down. Preservation is very important so… preserve the historic Gasconade Bridge!! Be proud of what’s still there!”

Publicity is the most instrument force we can ask for. We want to make sure our community is seen and heard. Missouri’s historic infrastructure is important, and right now it’s in the most critical condition. Our leaders need to recognize the need for maintenance and preservation of our aging highway system. While we still have these historical structures around, it’s imperative we preserve them for the sake of our growing communities. It’s not just a bridge, it’s not just a road, it’s a landmark. People tell stories about it, pay thousands of dollars, fly thousands of miles to see it, and they marvel over it. What will we leave behind for our children? Help us fix our historic structures. Help us get the attention of Jefferson City and Washington DC. We look forward to seeing you at the rally!

Concerned parties are also encouraged to sign a petition to save the bridge.”