I’m enrolled in Strategic Communications class at Webster University for the Fall 1 Session.  For one of my assignments, I was asked to answer some questions and then engage in discussions on the topic. Here is my answer plus some of my subsequent remarks.

Define “public relations” and “marketing” and explain why these functions often are confused.

According to Broom and Sha, public relations is a function of management that organizations use to build and maintain relationships with the public to the benefit of all stakeholders (Broom and Sha 2).

In marketing, organizations study what consumers want and need and strive to provide attractive and useful offerings in exchange for something of value (Broom and Sha 5).

In your answer, point out the major difference that distinguishes these functions.

The major difference between marketing and public relations is that in the former, there is an exchange between the involved parties of goods, services, money, or some other consideration that has value (Broom and Sha 5).

Contrast publicity with advertising. In your answer, address issues related to message control, expense and relationship to marketing.

Publicity is something that an organization might cultivate, or it could happen to them involuntarily due to some kind of unforseen issue or circumstance. Publicity professionals can use their knowledge to tailor their publicity submissions while targeting the right recipients so that the information is used in a way that is favorable to the organizations goals. They can’t compel or control how the information is used however (Broom and Sha 7). Some publicity can be had for free, while other publicity might involve expenses such as labor to research and prepare the strategy and content or mailing printed information.

Some of the same skills that publicists use are used by advertisers and in some organizations the same people people might perform both functions. Organizations are not necessarily consistent in how titles and functions are used and the public can be influenced by the portrayals of both types of jobs by portrayals in the media which are not always accurate (Broom and Sha 7).

In advertising, the organization is paying for the exposure which gives them control over where the message is placed, the timing and the content (Broom and Sha 10).

I took this picture early in the summer because I figured it would come in handy in marketing classes. One of the times that I used the Wal-Mart grocery pickup service, I got this surprise free bag with my order with free samples in it. Is this marketing or PR? Can they be doing both at the same time? 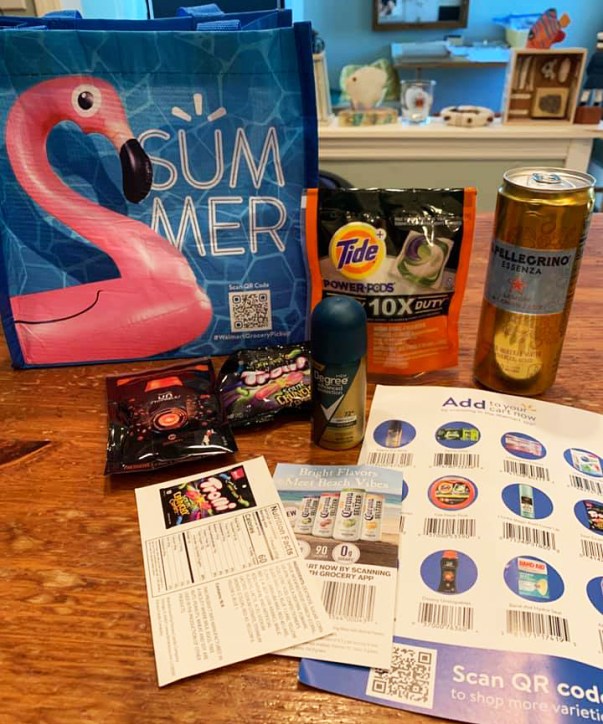 The book  (Broom and Sha) mentions that some efforts at PR are looked at with suspicion because it looks like the organization is trying to gain while appearing to be doing good, or some people already dislike and distrust the brand. There was a very different reaction among people depending on political affiliation with the stimulus checks, for example.

Wal-Mart is a brand that some people have strong reactions to. Wal-Mart gave me this bag of goodies when I had already used their services for awhile and it was a surprise. This was given out when a lot of brands were giving out some freebies to help out with COVID care and also get a little promotion.

For example at Schnarr’s, some companies gave us free hand sanitizer with their name on it to use for the store. Before masks were available at a reasonable price, I had a large stash that a client had given me for crafts, so I had plenty to share for awhile. If a customer came in the store really needing one to tide them over, I gave them one from my stash in a ziploc bag that I had packed after making sure my hands were clean. This is something I would have done whether or not it was good PR for the store and no one asked me to do it, but the store was my main exposure to other people at the time and it was something immediate I could do to help. I gave some plus some gloves to an old friend who works at a radio station. I didn’t give them to him because he works at a radio station, rather it was because he has health issues that make him very vulnerable and he was understandably  scared. I did not ask him to mention me or Schnarr’s (where he started buying stuff without being asked) on the air. I don’t know if he did or not, I didn’t ask. For me it was not a quid-pro-quo situation, but I was not at all displeased to get a new customer at the store.

The Wal-Mart bag doesn’t really have anything useful for COVID, but it was something that brightened my day. I loved some of the free samples and others I gave away. I have not re-ordered any of the free sample products but if someone wanted to Wal-Mart made it easy to re-order. I might re-order the deodorant if they have a non-spray version. It smells wonderful. Other than brightening my day and being good for health in that sense, this bag seems more marketing than PR. I think it’s effective because it thanks people for trying the service, and gives them incentives to try it again and at the same time makes it easy and convenient with the bar codes and QR codes. They knew they were probably getting a lot more new customers because they were one of the first to have pickup services and it was fully in place and working well before the pandemic so they didn’t have to put it together in a hurry.

Here is another example of something I’m giving away. Like a lot of gardeners, I tend to have more seeds than I need of some plants and I save some to trade and give away. A few years ago, I designed and printed out some of these little seed packet templates to fill with seeds and give away at Schnarr’s Hardware along with candy and other goodies like safety lights as “treats” on Halloween.

After the COVID-19 pandemic started, some friends and customers asked me if they should be concerned about food security and if so what to do about it. I didn’t really know the answers, but I know that when people are out of work that there is less money to go around and people who are poor will struggle more than usual to get their basic needs met. It’s not a new idea for people who find it difficult to afford food or live in “food deserts” that lack  stores to buy healthy food to engage in community gardening as a way to supplement the food supply. I gave some plants to someone who was trying to get a community garden started in his neighborhood.

Schnarr’s customers are mostly not of the group that needs to worry about meeting  basic needs, but there are a lot of customers that engage in gardening and might want some extra seeds to grow themselves, give away or trade. Also with possibly more kids being home schooled there might be more interest in home gardening so that kids can learn about plant biology and other related topics. I decided to reprint some of my little seed trading envelopes and package up some of my extra seeds for free giveaways as I harvest them.

Schnarr’s sells garden seeds, so is it a good idea to give some away? Mindful of not wanting to hurt sales I put small quantities in the packets, 4-10 seeds in each depending on the size of the seed. Someone who is not sure about trying a new plant or is casual about gardening in general might get inspired to do more if they try a free sample. That could bring us more sales in the long run of garden supplies. I put the Schnarr’s blog address on it so that people can read the large amounts of gardening information that I have contributed there. I think the information I put there will benefit those who want to learn more about gardening, but of course more readers also means more exposure for the blog. Those are a couple of ways that I think this giveaway can help Schnarr’s a tiny bit.

More importantly, how does this small action help the community? With the increased demand on gardening supplies in general that we have seen since the pandemic began, we are sold out of some seeds so even if someone wanted to buy a larger package of seeds from us, with some varieties they will have to wait. Some of my plants are species we wouldn’t carry anyway, so customers get the chance to try some new things. I also am convinced that since growing serious amounts of food is not easy, the more people who know how to do it the better off we are as a society. Added to that are the benefits to overall health of getting outdoors, interacting with nature and engaging in exercise. There has never been a better time to garden, if one is able, with the extra stress many of us are under – horticulture has therapeutic uses for mental and physical health.

I also put some of these seed packets in the little goody envelopes that I put in orders from my online store. I give a few to friends and fellow Master Gardener volunteers from time to time but since I’m not seeing those groups of people as often as I normally do, I need someone to give some of the seeds too!

What do you think, am I doing PR, marketing, or both?