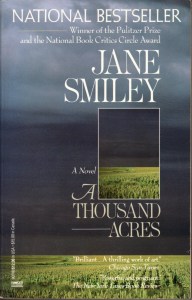 Most of the books I review are not exactly current. Why is that? One reason is that I like to go to used book sales to save money. The other reason is that it seems like most current fiction books that I’ve tried to read are not very satisfying. I don’t think about them after I read them and I could almost read them again without realizing I’ve read it before until I’m partly done. They often seem like they were written by committee and not edited by someone who understood how to make the point of the book comprehensible to the reader. Has anyone else noticed this? Did I just read the wrong books? So I’m quite happy to read older books because they are on average much better!

“A Thousand Acres” was published in 1991 and the story takes place in the late 1970s on a family farm in Iowa. The family in question is the most successful in the community so you think at first they must have it pretty good. The story starts off kind of light but there are hints to let you know it’s not going to stay that way. Even so I did not anticipate how dark the story eventually turned out. Once I caught on to that  it doesn’t quite get to the crescendo of horror I thought might be coming. What DOES happen is bad enough. In that way it reminds me of “Other Voices Other Rooms” by Truman Capote but is written in a more straightforward way without the surrealism.

It took me awhile to get to sleep after finishing “A Thousand Acres” because I was trying to think of what the point was of telling a story like this. The book was certainly absorbing and made me totally forget about my own life for a few hours – and I sure was glad to get back to it! I should probably give my Dad some extra hugs too! (You’ll understand why if you read this!)

I normally don’t read reviews before writing my own but in this case I read a couple to see if I was missing something big. I was – I don’t know Shakespeare well enough to recognize on my own that this is a modern retelling of King Lear. I already was kind of thinking that this book is for readers who are fans of good writing for it’s own sake, which I am. I enjoy it when writers indulge their own virtuosity. Knowing that it’s kind of a exercise of sorts makes me feel better about it – it seems like it does have a point other than just making you feel bad! If like me you are not familiar with King Lear this might be a better read if you DON’T know what might be coming up. The shock value is the best part of it – the idea of what might be going on behind all the pleasant and successful facades around you is not a pleasant one but it sure is interesting! I don’t want to give away too much about why it’s so disturbing but I will say it’s not a “horror” book – while there is death and cruelty there is not much blood and gore.

I did not feel good after reading “A Thousand Acres” and I’m not sure if I’m glad I read it so in what way is the writing good? Any book that can keep my attention that intensely for that many hours is good writing in my opinion.  I don’t know if I’ll ever read it again but I probably will keep it in the permanent library since it is good quality and I want whoever inherits my library to get a good one!

Here are some of my other older book reviews.