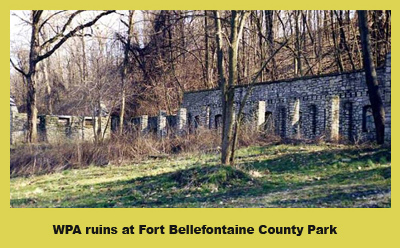 Fort Bellefontaine County Park on the banks of the Missouri River in North St. Louis County is one of my all-time favorite places for a hike. It’s more than just beautiful – it’s exciting and mysterious. History buffs will get a thrill here because in 1805 it was established as the first United States military fort west of the Mississippi and is the spot where the Lewis and Clark expedition camped on their first night heading west and on their last night of the return trip. The fort also played a role in the war of 1812 and was a trading post where Spanish, French and American traders did business with Native American tribes. The military moved to Jefferson Barracks in what is now South St. Louis County in 1826 and the Fort Bellefontaine site was later taken over by the City of St. Louis who established Bellefontaine Farms, later the Missouri Hills Home for Boys, on this spot. In the 1930s, there was a public beach here and the WPA built a Grand Staircase down the river bluff along with other stone structures intended to draw visitors to the area. The remains are quite a sight. At the top of the Grand Staircase a cannon is displayed. This bugs me because it gives the impression to the uninformed that the Grand Staircase is actually the fort, but unfortunately there are no remains of the fort to be seen. There is one small building on the site believed to be built from old fort foundations, but as far as I know all the other stone work you see here is from the 1930s.

I grew up in North St. Louis County and did not know of the existence of this place until the time of my first visit in 1990. Although the park was acquired by St. Louis County in 1986, as far as I know the only way to visit it in 1990 was by canoe – this is what I was told by my friend Rich, a fellow member of the St. Louis Community College at Florissant Valley Outdoor Club. He heard about it from the faculty mentor of our group, who was an avid canoeist and outdoorsman and knew about all kinds of interesting places to explore. Rich proposed that the two of us put a canoe in where Highway 367 meets the Missouri River, stop off to see the Grand Staircase, continue to the confluence of the Missouri and Mississippi Rivers and cross the Mississippi over to the Illinois side to visit the spot where Lewis and Clark began their trek to the Louisiana Territory and have a picnic lunch. Then we would continue down the Mississippi to pass under the Chain of Rocks Bridge and over the Chain of Rocks falls and take out at North Riverfront Park where we would leave a shuttle car. Canoeing or kayaking the Chain of Rocks falls is not something to be taken lightly even by very experienced paddlers. Fatal accidents are possible.

Well how could I say no to an action-packed itinerary like that? March 2, 1990 had fine weather for such an adventure and all went smoothly. I remember the date because it was one of the most exciting of my life! In the present day, the Missouri River shoreline has been cleared of brush immediately in front of the Grand Staircase but in 1990 that was not the case. After pulling the canoe up on the bank we had to bushwhack through the brush to get to the staircase – not that difficult to do in late winter when there were no leaves on the branches – it was fairly easy to see where to go. The first look at the Grand Staircase was not something to be forgotten and it was many more times as exciting as it might have been because we were not sure we were supposed to be there. We dared to climb the staircase to the top of the bluff and we saw some of the Missouri Hills Home for Boys Buildings. Most were in good repair but I remember one that was more of a moss-covered ruin and we watched snowmelt dripping from it in the bright sunshine with delight at the beauty of the architecture. A nearby stone gazebo still had some of the wood roof structure in place at that time.

I won’t go into detail about the rest of our awesome day except to mention that back in 1990, another thing that was very difficult to see except from a boat was the confluence of the Missouri and Mississippi Rivers. Now there are two public areas – Edward “Ted” and Pat Jones-Confluence Point State Park and Columbia Bottom Conservation Area – that give you access but at the time this area was private farmland.

In the second half of the 1990s, word began to get around that this was a park you could actually go to officially and it became a regular hiking spot for my family and I. 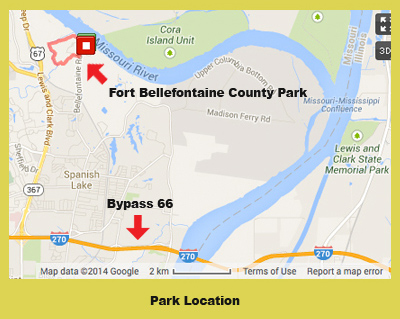 To visit the park, take the Bypass 66 Route westward from the Chain of Rocks Bridge and make a right on Bellefontaine Road and continue until it dead ends. There is a guard gate. Stop there and an attendant will write down your license number, get your name and issue you a parking pass. They usually know why you are there but if they ask just explain that you want to hike. There are a couple of parking spots you can choose, I like the one near the top of the bluff at the Grand Staircase. You will discover that there is a lot more to see than the Grand Staircase. At the base of the bluff is a hiking trail. If you take it to the left, you will follow the Missouri River upstream for a bit until you reach the spot where Coldwater Creek terminates in the Missouri River. Along this segment of the trail are a number of interesting ruins and information signs.

To see the end of Coldwater Creek is especially interesting to me because the creek is a major personal landmark. Where I grew up in Florissant, the creek passed close to our house and some of the best times of my childhood were spent on a wooded trail that ran parallel to the creek and linked two parks and a cemetery. It was not an official trail – the local kids wore it through there! My neighborhood friends and I had what we called our “hideout” which we used to furnish with rugs, drapery and a makeup table (!!??) in a tangle of small trees (which is still there!) near the creek in back of St. Ferdinand Cemetery. Sadly the trail is overgrown now and it’s hard to even see where it might have been, testament to the fact that kids don’t play there any more. Perhaps that’s for the best though. Creeks that function as storm drains are not really safe places for kids and Coldwater Creek, which originates near Lambert Airport, besides being known a huge source of fun for many North County kids, is also notorious for possibly being contaminated with toxic waste and there is suspicion that those who spent time in it or near it might be prone to diseases in adulthood.

The creek is certainly not devoid of life. I don’t know if it contains fish, but there were crawdads in it when I was young (which I used to try to catch of course with little success) and there are still crawdads in it now. It also supports fresh water clams. On a recent Fort Bellefontaine hike we found clam shells of all sizes including some almost as big as my hand! Small frogs are present and we saw evidence of predatory birds feeding on critters – large heron footprints in the mud and collections of excreted crawdad parts! 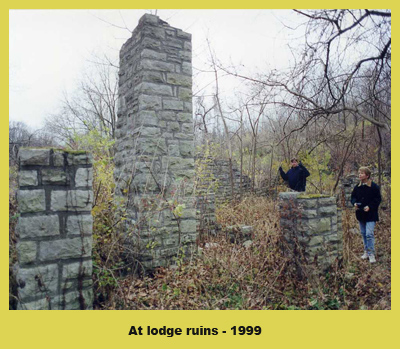 The trail follows the creek upstream where eventually you can see a very interesting ruin of a lodge which is starting to fall into the creek due to bank erosion. Shortly after this ruin the trail turns uphill. This is the only part of the trail that is at all challenging. After the short climb, the trail forks off. To the right it skirts a pond in an open grassy area. This part of the trail is new. If you take the trail left, this is the route we used to take when we first started hiking here. It takes you past a police dog cemetery and a police dog training area. You don’t see that every day!

Whichever fork you take around the pond, you will be led back to a trailhead at one of the main roads that passes through the youth facility. Follow one of those roads back to the bluff top and you’ll be back at the parking spot. There is a shorter segment of trail on the right, which I’ve only actually been on one time. On the way out, stop at the guard shack and turn in your parking pass and leave with great memories of a really unique place!