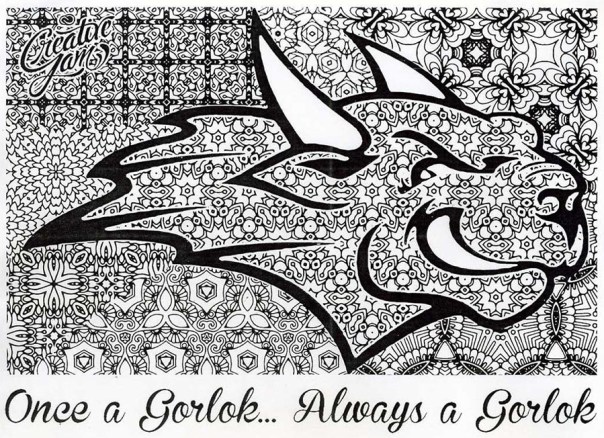 That’s the mascot of Webster University where I just started to work on a Master’s Degree in Marketing and Advertising Communications. I had to look up what a Gorlok is – it’s a Cheetah/Buffalo/St. Bernard mix made up in the 1980s inspired by the intersection of Gore and Lockwood streets. I got the above coloring page in my welcome packet. It’s good to see adult coloring is still really popular! It always will be popular with me I think. However disloyal I’m afraid my favorite mascot will always be the University of American Samoa Land Crabs!

I’m going to be writing a lot of papers, so look for them to appear on this blog if they turn out well. I write all the time so thinking of something to write about does not scare me but it’s literally been decades since I tried to write in an academic style so that will be a bit of an adjustment. My first few papers will likely be dealing with some aspect of marketing theory. That might sound kind of dull at first but after giving it some thought, people and institutions make important decisions based on marketing theory all the time. In our culture we’ve been living with mass media for the entirety of our own lifetimes and so have multiple generations of our predecessors. Because of the type of work I’ve chosen to do, it’s obvious I think media is interesting, important, and influential. If I can learn and share some things about how to better understand this complicated culture we’ve created, I think that is worthwhile. I have to decide by tomorrow morning what the topic of my first paper is going to be. Some topics I’m kicking around in my head are:

As you can see I won’t have any trouble thinking of something interesting to explore. What I will have trouble with is making it fit into a three page paper!

Although I am out of practice in academic writing, I’m not out of practice in being a student. It’s been 26 years since I’ve received my B.F.A. degree but in the meantime I’ve taken numerous Continuing Ed classes and worked in jobs that required constant learning of new material. When I studied for my Master Gardener certification in 2016, that sharpened my mind quite a bit because I had to get used to studying for tests again. Tips we were given in class about helpful technology made that pursuit easier than it used to be. Being tech and media savvy are big help when you’re a returning student as well as in life in general. When I graduated from St. Louis Community College with my A.A. degree, I was the commencement speaker. I haven’t re-read my speech since I gave it because I don’t remember it as being very good and I don’t want to cringe! Some of my writing from that time I still like but I don’t know about that one! My overall theme however, to encourage lifelong learning and to not stop after you graduate, was something I was passionate about and at least following my own advice in that instance has served me well. I’m still passionate about it and that is why I love to learn and to teach.