The new season of the Netflix series “The Crown” is out. Around this time last year I wrote a homework assignment paper about the production elements in the show for Media and Culture class. As I start to view the new Season 4, I’m recalling our studies last week in Media Organization Regulations class on the legal aspects of privacy. How does what we learned illuminate how entertainment companies depict real people in a fictionalized drama? Here is an amalagamation of a couple of last week’s homework assignments. If you like to watch “The Crown” or other dramas based on historic events and real people, you might find some of the legal considerations involved interesting. In the series are also depictions of emotional abuse and mental illness, topics I’ve written about before and which again came up in last week’s homework. Abuse takes many forms and some of them are perfectly legal. These selections have been graded by my professor but I didn’t make any changes before publishing. Please keep in mind I am not an attorney or law student, I’m an Advertising and Marketing Communications major. Enjoy!

The theory of a right to privacy developed in US law over about the last 130 years, derived from the 3rd, 4th, 5th and 14th amendments (Trager et al 234). The right to privacy is defined as “1) The right not to have one’s personal matters disclosed or publicized; the right to be left alone. 2) The right against undue government intrusion into fundamental personal issues and decisions” (Legal Information Institute “Right to privacy”). 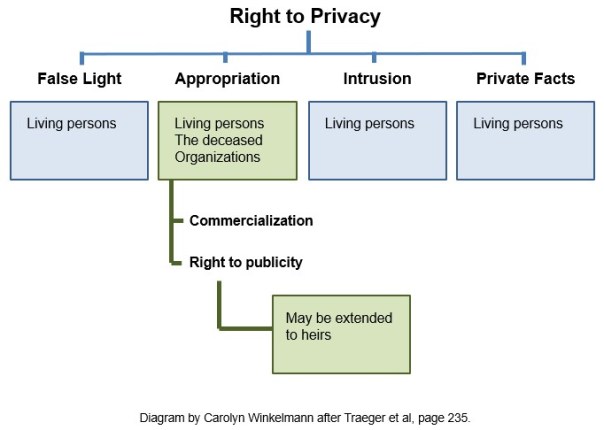 Celebrities don’t forfeit their right to privacy by being celebrities, but since people want to know about them many of their activities could be considered newsworthy (Trager et al 246). That doesn’t mean people are entitled to know facts about a celebrity that are not determined to be in the public interest (Trager et al 260, 262). A person’s notoriety might make them the licit subject of a satirical, artistic or transformative work that stops short of commercial use (Trager et al 248-249), which would interfere with the celebrity’s right to publicity.

Appropriation torts are recognized by 46 states, the District of Columbia, the U.S. Virgin Islands, and Puerto Rico (Trager 235).  The remaining four states have yet to rule on appropriation (Trager 241).  Commercialization and the right to publicity are the two torts included in the privacy law category of appropriation (Trager 235).  Commercialization, also known as misappropriation, is the act of using the likeness or name of a living or dead person in advertising or for commercial purposes without seeking permission from the individual in question or that of the heirs (Trager 236, 241).

The commercialization prohibition is less likely to be applied to a deceased person than right of publicity because it is intended to prevent emotional distress to an individual by upholding the person’s dignity in preserving their personal right to privacy.  As a personal right, it is not usually thought by the courts to apply after death, unlike the right to publicity which deals with the monetary value of one’s identity a form of property that can be transferred or inherited (Trager 242).

Dan Frazier is a retailer and activist who sells left-wing themed political merchandise and other products through his company Lifeweaver LLC (Lifeweaver LLC, team@lifeweaver.com).  In the first decade of the 2000s he started selling anti Iraq war t-shirts with the names of U.S. soldiers who had thus far died in the war as part of the design in small print.  Enough families of the deceased soldiers were outraged by their family members names being used to make money for Frazier that laws were passed in several states making the sale of merchandise that appropriated soldiers names or likenesses without permission illegal (Fischer, “Mom Wants Dead…”).  Frazier’s home state Arizona was one of those passing such a law (Fischer).  Frazier, represented by the ACLU in a case heard in a federal court in Phoenix, was able to stop state and local officials from prosecuting him, citing First Amendment rights to freedom of speech.  The federal court declined to strike the Arizona law from the books and decided to let future similar cases be decided on their own merits (Fischer).  The defenses against appropriation are newsworthiness, the appropriated material being in the public domain, freedom of speech under the First Amendment, incidental use, self promotional ads for the mass media, and consent (Trager 245). How would these defenses possibly apply to Frazier’s case and any future cases that are similar?

The U.S. Supreme Court has decided an appropriation case based on newsworthiness before, in hearing whether a news station deprived stuntman Hugo Zacchini of his rights to make a profit from his human cannonball act by airing the entire act as part of a news broadcast.  The court found in Zacchini’s favor, giving his right to publicity more weight than the news station’s First Amendment right to free speech (Trager 247).  In Frazier’s case, newsworthiness is obliquely mentioned in the complaint (Frazier CV07-8040-PCT-NVW) but not as a factor in the decision (Frazier 07-CV-8040-PHX-NVW) though perhaps it could have been.  Deaths in war are news, and courts have previously found that newsworthiness is a defense even though news content is sometimes sold (Trager 246).  Dan Frazier presents his company as a retailer of products as opposed to a news organization (“Campaign Finance Report…”, team@lifeweaver.com).

The names of those killed in war are public information, as again obliquely mentioned in the complaint (Frazier CV07-8040-PCT-NVW), and in my opinion would qualify as factual information that is in the public domain (Trager 248).

Most prominent in the complaint and the court’s findings are issues concerning free speech under the First Amendment. Cited in the decision was a U.S. Supreme Court case, Riley v. National Federation of the Blind, which ruled that if speech is a blend of commercial and some other purpose, the two purposes cannot be parsed out and must be considered together. Given this finding, Frazier’s t-shirts were determined to be protected by First Amendment rights as any other type of political speech would be (Frazier 07-CV-8040-PHX-NVW).

Ads for the Media

Mass media may use names and likenesses of public figures in advertisements for products if the identity-related elements are part of the original content (Trager 251).  The court in Frazier’s case considered but declined to evaluate separately the legality of the t-shirt products themselves and catalog pictures of the t-shirts with close ups showing some of the soldier’s names.  Perhaps the court did not feel it necessary to comment on whether it mattered in this context whether the names were of private or public figures since it had already found that pictures of the merchandise were “inextricably intertwined with otherwise fully protected speech” (Frazier 07-CV-8040-PHX-NVW).

Frazier made no pretense to claiming consent.  His web site included a statement reading, in part, “I have no plans to remove any names or discontinue any of these products, no matter how many requests I receive” (Watters).  He and his legal team believed they did not need it, and were eventually found to be correct in the legal sense (Frazier 07-CV-8040-PHX-NVW).  Frazier’s personal code of ethics did not preclude him from acting in a way that caused some families of the fallen soldiers listed on the t-shirts to experience what they categorized, but were unable to prove in a Tennessee court, as negligent and intentional “infliction of emotional distress” (Read).

Frazier did not need to invoke the defense of incidental use to justify the soldier’s names on the t-shirts, but in my opinion incidental use would have applied (Trager 252).  An individual soldier’s name was not the main focus of the shirt design and was in a font small enough to only be legible at close viewing (Frazier CV07-8040-PCT-NVW).

In my opinion the commercial appropriation issues invoked by the t-shirt design are not in the “zone of interest” of the Lanham Act of 1938, which is concerned with false or misleading advertising (Trager 556).