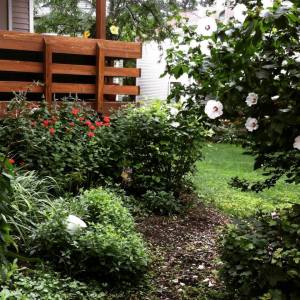 Life can be stressful at times. If we don’t take time for self care our health can suffer. I recently saw an advertisement for a workshop about gardening and holistic self care. I was not able to attend and learn some new things, but I can think of a lot of ways in which my garden already helps me with my own self care.

Read more on the Schnarr’s Blog: How I Use My Garden for Self Care

Last year I was in the beginning stages of a relationship and my then boyfriend saw this book on my shelf. He expressed concern over why I had this particular book in my library – I explained that I had been a subscriber to Dr. Laura’s web site for a couple of years and each year her people send subscribers a free book or DVD. Now I have an idea why he was concerned about this book – he apparently knew he’d eventually be betraying me and feared when that happened I’d want to read this title and get back at him.

Well, he needn’t have worried about this book’s effect on his own well-being. Much of the book is dedicated to persuading people NOT to take revenge on those who have harmed them. Not because it’s not satisfying sometimes, not because the betrayers don’t deserve it, but because it usually does more harm to you than it does to them. This book also helps you realize the sad truth that some people don’t demonstrate any empathy for you because they don’t know what it’s like to have feelings. They can only imitate what other people feel and they can’t really be harmed by anything you do because they don’t care. They are very good at acting and fooling people because they’ve been doing it their whole lives. Even worse, they may get enjoyment from knowing how much they’ve upset you, so don’t be tempted to give them further entertainment by demonstrating your pain to them. I’ve often wished I didn’t have feelings, I’m sure life is easier if you can’t be hurt, but I guess God gave me feelings for a reason.

There is also a lot of reinforcement to help you avoid being taken in by the same person repeatedly and about appreciating the things you do have in your life that are good. That’s not very satisfying when you’re freshly betrayed and experiencing high emotions, but in the long run I believe you will be happier if you take this advice. It might also make you feel better to read anecdotes about people who have been hurt even worse than you have been, as hard as that might to imagine when you’re upset.

This book could possibly help you out even you don’t read it. Just put it in a prominent place in your home. If it makes anyone nervous, maybe that’s a sign you need to have your guard up around this person.