I started seeing poop emoji pillows for sale in mall kiosks last fall. Ever since then I’ve been tempted to buy one – why? They make me laugh, that’s why, and I like to laugh! But I have been too embarrassed to buy one. It’s kind of hard to justify at my age! At JoAnn Fabrics and Crafts, where I teach classes, they have started selling emoji merchandise. You can buy patches, pillows, pillow kits, suncatcher kits and more. The poop designs seem to sell out a lot faster than the other emojis, so I guess I don’t need to be embarrassed. Still, I feel better about making a poop patch and poop pillow rather than buying one. I can always justify it as sewing practice, right?

When I was in seventh grade, my Mom made a duffel bag for me out of an old pair of my jeans. I used to use it for Girl Scout camping trips. It’s a good size for transporting a sleeping bag, pillow, air mattress and sheets. When I was older, for nostalgia reasons I got it out again and I decided it would be a good place to display my growing collection of patches. Over the last several years I’ve been sewing on old patches and collecting new ones and adding them to the duffel bag. It’s a great conversation starter on trips and reminds me of fun times! 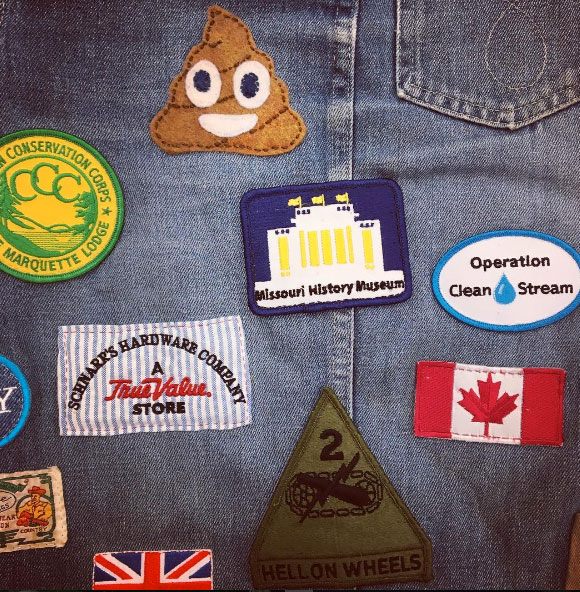 To make the poop patch, I downloaded a pattern and used Photoshop to size it for a patch. I printed out the design and traced it onto tracing paper. I made extra tracings to use for cutting and lining up.

To make a poop patch like mine, transfer a tracing of the outline of the poop, the white smile and the white part of the eyeballs onto scrap chipboard. Cut out the chipboard.

Take a tracing on tracing paper of the whole poop design, with the brown lines and facial features indicated and pin it to the front of the brown felt piece. Use it as a guide for where to pin the white smile and eyeball pieces. Using white thread, sew around the edges of the white pieces to hold them in place.

Using dark brown embroidery thread, sew the brown diagonal lines using a running stitch. Don’t sew the outline yet – you’ll sew the outline when you sew your patch where it’s going to go. Carefully tear the paper away. A pair of tweezers is helpful for removing tiny bits of paper that might stick in small crevices.

Make a tracing on tracing paper of only the eyes, including the pupils and cut out, leaving some space around the eyes for pinning in place. Pin your tracing over the eyes so you can see exactly where to sew the pupils. With black embroidery thread, outline the pupils then fill them in solid with a satin stitch. Tear away the paper.

When you sew on your patch, use brown embroidery thread around the edge. You’re done! 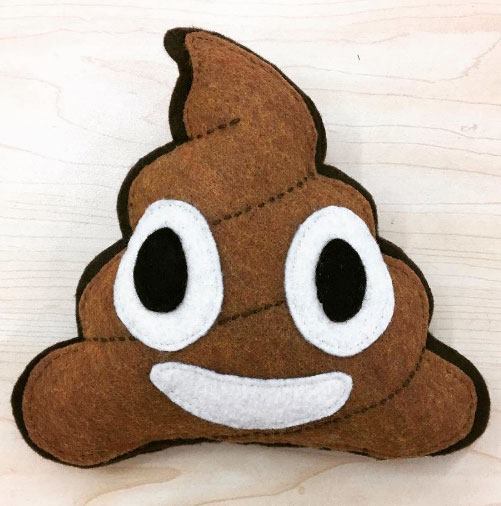 Pictured above is the small pillow I made from the same pattern at a larger size. Because of the larger size I sewed on black felt ovals for the pupils instead of using stitching only to fill them in. I used two pieces of dark brown felt as the pillow body. Cut a little larger, they made a nice outline. I sewed the medium brown felt portion with all the details onto the front.