One of my frequent landscaping tasks in summer is weeding at clients’ properties. Many of the weeds can be hand-pulled, but on a recent occasion there was such an abundance of Prostrate Spurge (Euphorbia maculata) that it was hopeless to try to pull it in a reasonable amount of time.

Read about how we decided to deal with the Spurge on the Schnarr’s Hardware Blog! 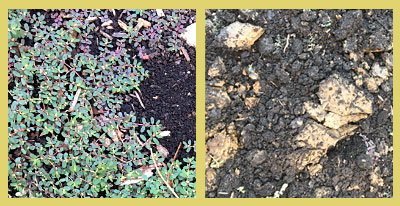 At the left is a spurge-infested patch, and on the right is how it looks after the soil is turned over with a spade. Since we are not going to plant anything here, we don’t need to take the time to break up the clay chunks – nature will do the job over time.

What is Lasagna gardening? No, it’s not growing delicious tomatoes and herbs that you can put in your lasagna, though you may eventually be able to do just that depending on your conditions. Lasagna gardening, also known as sheet composting, is an organic gardening method that entails covering the ground with layers of materials of organic origin and allowing them to naturally break down over time. The benefits of this method are less time and labor spent weeding and tilling, creating healthy soil for healthier plants, and reaping the many benefits of compostable materials instead of wasting them.

It’s late winter here in the St. Louis, Missouri area and we’re having an unseasonably warm weekend – not that I’m complaining! This is a good opportunity to look over my garden while the ground is relatively bare and make plans for the coming year.

Every garden has it’s own challenges – I started my current garden in January of 2005. My main goals for this project were to grow some culinary herbs and do my part for the environment by managing my garden to benefit wildlife and have a positive impact on the local water, air and soil quality. When I started the only plant growing in my garden was liriope – a nice plant but not that interesting by itself. I have made a lot of progress. I have found a number of plants that will grow in my part shade conditions. I have built raised beds filled with imported soil, sand and masses of organic matter over the mixture of clay and construction debris that passed for soil before I started. I have excavated buckets full of bricks and other debris. I have installed connected soaker hoses under all the beds to make watering easier and less wasteful. I don’t have all native plants but I have planted some as food for native wildlife. I have attracted a population of birds and beneficial insects that do nearly all of the pest control for me. Japanese Beetles and Eastern Tent Caterpillars are no longer a major plague on the flowering trees outside my bedroom as they were when I first moved here.

There is still a lot of room for improvement. I live in a condominium and I’m fortunate that the condo owners’ association lets me garden at all. My unit is on the ground floor and on the end, so I’ve claimed three sides of that end of the building for my garden which gives me quite a bit of linear space. I’ve let my near neighbors know that they can garden there if they want because I don’t own the space, it’s common ground, but none are interested so for now that’s my garden. I imagine most people live in condos because they don’t want to bother with yard work and things like that, but some of us in the condo complex do garden, we even had a garden club for awhile. I’d much rather work on a garden – for me it’s a hobby – than maintain lawns or shovel snow so I’m happy to let others do the maintenance type things outside while I do the creative stuff! My gardening style is different from how most of the rest of the condo complex is managed. I prefer the permaculture way of management. I like to plant mostly perennials and leave them standing until late winter for wildlife habitat and food, while the landscaping company employed by the condo complex likes to plant a lot of annuals and leave large patches of ground bare in the winter. I don’t think they object to what I’m trying to accomplish, the property managers seem to be wildlife friendly, but it’s taken some time to get them to understand what I’m doing. Wildflowers, native plants and herbs look unusual if everyone else in the vicinity is growing hostas, begonias and impatiens, I understand that.

One of the major problems my garden has is that it looks sloppy in winter. Having a garden that looks good all year in a continental climate is really difficult even when you have complete control over your space. I think leaving perennials stand in winter is much more attractive than bare ground, and the local birds benefit from the resulting cover and food. This practice is good for the health of the garden also – it keeps soil from washing away, helps maintain the fungi, bacteria and tiny animals that keep soil healthy, provides shelter for new seedlings to increase the number of plants available and the standing plants serve as overwintering places for beneficial insects. Unfortunately when the landscapers come by with their leaf blowers, the standing plants (if they are still standing) end up looking bedraggled and beaten up and a lot of the mulch I put down gets blown away. Some of this mulch ends up in the grass which does not help the already struggling lawn. By far the best thing for my garden would be for the leaves in my garden to be left alone – I’d have less dieoff of plants over the winter and the soil would be much healthier both for my own plants and surrounding trees in the lawn – but I don’t know what my chances are of persuading the management go along with that. I do have a proposal that I’m going to run by them for leaf management in my garden next fall and it remains to be seen if they’ll go for it. In the meantime, how can I make my garden look neater?

One problem area is the ground around my Rose of Sharon (Hibiscus syriacus) bush. If you have one of these plants, you know they are very prolific seeders. There are positive aspects to this – I’ve observed three species of birds eating the seeds and the abundant flowers attract masses of bees, butterflies and hummingbirds – but you do have to keep up with the extra seedlings! I’ve been unsuccessful so far in getting much else besides Rose of Sharon seedlings to grow under there so for now I’m going to put down some cardboard, paper, and other biodegradable barriers to kill off last year’s seedlings, add a layer of dirt, and mulch the heck out of it so it’s not unsightly. This is my favorite method of weed control – much better than poisoning the ground! There are a few Blackberry lilies hanging on somehow there and if my memory is correct some irises also so I’ll go around those so they don’t get smothered.

This task ended up consuming much of the day – one reason is that my source for the dirt was to dig a large hole in an area I use for a “dirt mine”. I needed a lot of dirt so I dug the hole bigger than I ever have before and as a result ran into a lot of construction debris which took some time to dig out of the heavy clay. This is not all bad – free bricks are handy for shoring up raised beds and I think I have a plan for the large flat rocks! Stay tuned for the next garden improvement!