Normally when I find a nestling baby bird on the ground, I take it to a wild bird rehabber. In 2009 three baby birds fell out of my neighbor’s dryer vent that I had to deal with differently – they were starlings. I knew what species they were and exactly when they were hatched because from my desk I can see out the patio door. On the building adjacent to my condo there is a little ledge that the starlings use as a staging area where they land before entering the dryer vent. That landing area is in direct view of where I sit while I work. It’s lucky for these birds I knew the species before I brought them in to a rehabber. Why is that? Many rehabbers will euthanize all starlings brought to them because they are not a native bird. They are believed by many to be destructive to other birds and are hated and persecuted by some people. By the time I called the wild bird rehab about my first batch of starlings, two of them had died – now that I know more about them I realize these two were never really healthy and they did not grow much before they died . When I spoke to the rehabber on the phone I was down to one bird and we had bonded with each other. I had been warned that the rehabber might want to euthanize my bird because I had done extensive reading on starlingtalk.com to learn how to care for them and I was made aware of how starlings are usually treated. The rehabber I spoke to seemed eager for me to keep it as a pet and I interpreted that as knowledge on her part that it would be euthanized and she knew it would be better off with me. I’m not 100% sure that my interpretation was correct but I did look on that organizations Facebook page a few days ago and looked through several years’ worth of photos of bird clients of theirs and there was not one starling picture. As common as they are it seems like there should be some if they rehab them, so I’m assuming they don’t. There is another bird rescue organization in the area that deals with raptors and larger birds and they sometimes feed starlings to their clients so I know not to take any there! 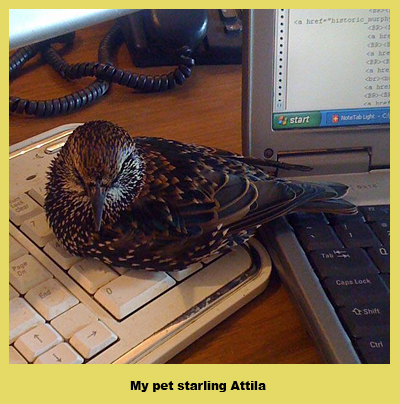 So I kept the surviving bird and named her Attila because of her rapacious appetite and we’ve been living happily together ever since. I adopted Pooky in 2011 at the age of three months old and with two starlings to compare to each other I realized Attila is female and Pooky is male. Living with two starlings is delightful in many ways – they are great talkers with a huge vocabulary of human words and phrases as well as environmental sounds and songs I’ve whistled to them mixed with crazy bird noises. They are very affectionate. Often when I’m working at my computer they are out of the cage and climbing on me and if they are in the right mood sleeping on my arm, snuggling against my neck, or in Pooky’s case sitting on my chest or in the crook of my elbow getting petted (Attila doesn’t like to be touched). They are easy to train and with their intelligence, curiosity and rather imperious attitude they are always surprising me and making me laugh with their antics. Starlings are not suitable for people who want a low-maintenance pet. It takes some adjustments in lifestyle to live with one – you can read about the requirements here – Is a Starling Right For You?

I woke up this past Mother’s Day, May 11, 2014 (coincidentally also Attila’s hatch day) not feeling very good because my mother died in 2010 and I had no mothers or grandmothers to go visit. Usually the first thing I do upon waking on a spring morning is open the patio door and look out over the back garden. I’d been watching the starlings nesting in the dryer vent with interest for a week now and enjoying the sounds of the babies calling out. Over the winter I had sent an email to the condo association office to remind them that it would be a good time to block that dryer vent before there was a nest in there again, but nothing was done so the starlings were back. It’s not that I object to the starlings – I love them obviously, and I also love that they eat lawn grubs, Japanese Beetles and tent caterpillars. But I don’t want my neighbor to have a fire in his dryer vent and I don’t want more baby birds to fall out. Well on this morning most of the sounds were coming from the ground, so I went over there to investigate, and sure enough, in the same spot where I found Attila five years ago, there were three adorable one week old baby starlings on the ground. 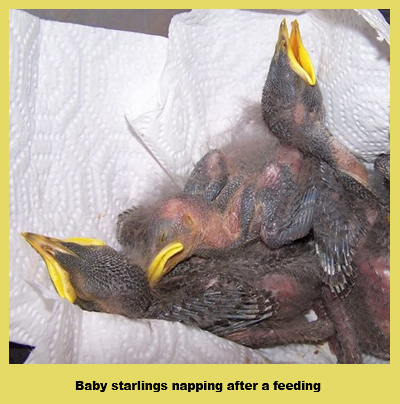 Normally the best thing to do is put them back in the nest, but I could not reach it – my stepladder is not tall enough. So I took them inside, made them a makeshift nest, fed them, and thought about what to do. Being foster mother to some baby birds on Mother’s Day was a great way to dispel the gloom of having no mother, but for how long? I knew that I now had the knowledge to raise them and take care of them, but could I handle having a total of five pet starlings? I know of people who have larger flocks of starlings than that in their house but they probably don’t live in condos with close neighbors who would not be thrilled with the noise. Attila is not very noisy but Pooky is quite loud at times and one Pooky is more than enough! Luckily neither bird is loud at night or early in the morning which is probably why my neighbors haven’t complained! Then there is the expense – it doesn’t cost much to feed them, but they get vet checkups once a year and for two birds it’s not that big of an expense but five? That’s several months electric bill! So that’s a no. Finding good homes for them would not be easy. It seemed like a better idea would be to try to build a nest box and get the parents to raise the babies in there.

So I looked online for starling nest box plans and called my Dad to see if he had enough wood on hand to build it. Dad is the handy type and has all the tools and usually sufficient supplies around for small projects like this. He said yes so I came over with the plans and he generously did most of the work. I could have done it but it probably would have taken me about four times as long and time was important in this case! I came home Sunday evening with a nice nest box. The next step was to call the condo association in the morning and get permission to place the box (they are very strict about what you can do on the outside of your unit) and to borrow a ladder to get the remaining starling baby out of the nest. It took about 24 hours to work through all the layers of bureaucracy but finally on Tuesday morning the head of maintenance and a helper came over and held the ladder while I climbed up to get the last baby out. It took the whole length of my arm plus a restaurant-style serving spoon but I barely managed to scoop it out. I put all four babies in the makeshift nest and put them in the box then tied the box to my stepladder and placed it near the dryer vent. The maintenance guy put a grid cover on the vent so they couldn’t get back in. 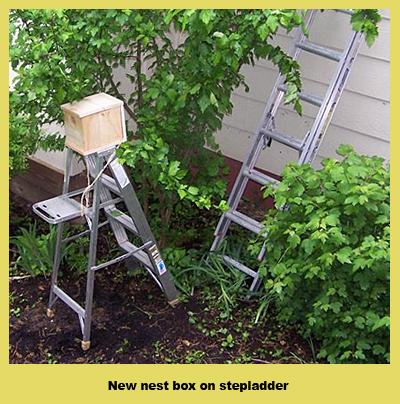 Now came some anxious waiting. By this time the babies had been with me 48 hours. They were already used to me feeding them – they would call out when I came near and their little heads would turn and look at me when I walked by – and accustomed to their new feeding schedule (once every 45 min on Sunday, once an hour on Monday). Believe it or not for the last two feedings on Monday evening they started making noise about a minute before my timer went off. Would they adjust back to being fed by the parents? And would the parents take them back? Several times the adult starlings approached the box with food without going in and I held my breath. Then finally success! After about three hours of steady feeding I declared the operation a success!

I’m writing this on Wednesday morning. I checked the babies first thing after waking up and they look fine and the parents are still frequently feeding them! They should be in the box for approximately another week and a half. Assuming no further disasters it will be a lot of fun to see them fledge! I don’t doubt that most people reading this probably think I’m out of my mind for spending this much effort on baby birds, and baby starlings at that. As far back as I can remember I’ve always been sympathetic to animals that other people don’t like especially if the disdain is for irrational reasons – insects, bats and snakes being prominent examples. Before starlings became my favorite bird, I was most fond of turkey vultures, considered ugly by some but beautiful to me. How much is a baby bird worth? Since I have intimate knowledge of what an adult starling is like, to me they are priceless!