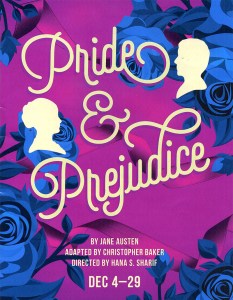 My husband and I have been gifted season tickets to the Repertory Theatre of St. Louis preview nights by his parents and it is our custom to go to dinner with then before each new production. Usually I like to ask if any of the party are familiar with the play. If it is adapted from a book, I want to know if anyone has read it and what they thought of it. Until recently I haven’t seen a lot of live plays so I’m trying to learn as much as I can.

I read “Pride and Prejudice” long ago and I’ve seen both modern and period style movie adaptations of the novel, but none of these were recent and fresh in my memory. I described what the story was about to the best of my ability to our party and my husband said “So it’s like a chick flick”. Coming from my husband this is not a put down. He likes “chick flicks” – he is the one who introduced me to Hallmark Christmas Movies for the first time which also could be considered “chick flicks” but whose audience is around 30% men. I searched for podcasts about “Pride and Prejudice” to learn more about the history and context of the original novel and came across an episode of “The Drunk Guys Book Club Podcast” in which they admitted that they read the book because it’s something that one probably should read if one has aspirations of being well-read. They admitted it was not their usual taste but they are aware the story is enjoyed by many women even in the present day.

The central driver of the plot is an English country family with an estate that legally must be left to a male heir and is entailed – it cannot be divided up among the daughters of the family which has no sons to provide for their future support. The daughters must find husbands who are able and willing to support them and if circumstances make it necessary, the possibly future widowed mother and any sisters who don’t find husbands. The closest male heir is a cousin and it would be advantageous for the family of one of the daughters could wed him so at least some of the family remains connected to the estate.

If this plot sounds familiar, it’s because it’s similar to Downton Abbey, a popular television historical drama that familiarized many Americans with entailment and primogeniture and how those practices affected landed families in the UK that were trying to preserve estates and retain social status. It wasn’t always possible in real life to do that and indulge in romantic love at the same time. Pride and Prejudice the play makes no attempt to explore the fates of the working class or servant class which have very different concerns. American life in the present day has many differences to the landed gentry life of the early 1800s or the aristocratic life of the early 1900s depicted in Pride and Prejudice and Downton Abbey respectively. Regency England is so far from life in the US in 2019 but not so distant that we can’t enjoy this play today.

It isn’t always easy in the present day to find romantic love even when women have a lot more freedom and economic independence. I thought about this while watching the play because when I was dating my now husband, I told him that I might eventually sell the two small homes I own, but I wasn’t going to promise to sell them at any particular time or at all. I told him that I would of course take his opinions about managing them into account and make decisions that were best for us as a couple, but since I could afford to maintain the properties with my own money I was going to be the final decision maker. I told him if that was a dealbreaker for him to tell me now.

Does that seem like an odd question for a woman in her late 40s to have to ask a suitor in the year 2017? I think it’s odd indeed, but I learned from the relationship proceeding the one with my now husband, that yes I had to ask it. I thought I was on the verge of a proposal from my previous boyfriend, but he abruptly dumped me. He told me the reason for his action was that he did not approve of my renting an art studio. When I suggested that after marriage I move to his home and use my then current home as a studio because the cost of owning it was roughly the same as rent for the studio, he told me it was not acceptable for me to consider still retaining ownership of my condo and he was finished with me for even thinking about it. He believed I was incompetent at managing money (guess which one of us was and still is debt-free) and he didn’t want me to continue to do art projects. It’s possible there was a lot more than that going on, but I have it in writing from him that those were the reasons he was willing to admit to. I believe he was really a fake suitor and not a real one but I thought he was for real at the time. Yes, I’m old fashioned enough to still think in terms of “suitors”. I haven’t spoken to him since other than superficial politeness if we are ever at the same events. (The reason we met in the first place is that we like similar events and know a lot of the same people. I’m polite if spoken to because I don’t want to make other guests or the hosts uncomfortable.)

After that I decided that if I ever got the chance to be in a relationship again and it looked like it might be leading to marriage, I would have this conversation earlier since apparently some attitudes I thought were a given in the present day in our current culture are, in fact,  not. I wanted to get married but not if I had to give up my right to own property to do it. I had read the essay “A Room Of One’s Own” by Virginia Wolf in my teen years and as a creative person I fully understood the implications even if I didn’t yet understand how hard it was going to be to get “a room of my own” AND romantic love and how long I was going to have to wait.

I told my husband that if he liked Hallmark Christmas movies he would probably like the play we were about to see. The heroine is rewarded for her strong-minded and unorthodox approach to life. She finds love with a handsome man and security for her family, similar to many Hallmark movie plots. The play even ended in true Hallmark style with a couple of conventions I won’t spoil but which you can probably predict! With its disturbing background about the rights and roles of women in the circumstances in which it was written, it can be paradoxically enjoyed as light Holiday fare if you don’t dig in too deeply. And if you want to dig in deeply there is plenty of substance to reflect on later. Is this story romantic or anti-romantic?

Enjoy the florid manners, witty banter, choreography, romantic comedy conventions and lush production. As someone who appreciates design and sewing, I was particularly taken by the costumes and would have been entertained by those alone if necessary! There is a big cast with lots of costume changes and I loved how certain characters wore variations of the same color to help you keep track of who is who. If you go, if you are not very familiar, to get maximum enjoyment out of the play I recommend brushing up a little on the characters beforehand so you are not confused. Also don’t do what I did and remain seated during intermission. It’s a long play and I got a little restless-leg feeling going at the end which made me fidget to try to get my leg comfortable. (When I was younger I called it “movie knee”.) Do walk around a bit if you can!

I put some links to help understand more of the historical background here:
Literary Origins