Our next door neighbor has been discharging most of her drainage into our yard for years, causing thousands of dollars of damage to our property. We installed rain gardens to keep her runoff from further damaging our home. St. Louis County wants us to get rid of our fixes and be subjected to damage again when the problem originates next door. I’m going to document our steps again as we fight this plus the time I’m spending, so I’m beginning a new log. Where we left off, I had spent 27.81 hours working on our defense.

The first log explaining the background is here:
Drainage Problems Are Bringing Tom and Me To Court

01-14-20 – Received letter saying we have to remove our landscaping along the fence line.

01-15-20 – I sent an email to an official from MSD, the St. Louis County Property Complaints division, and John Geiler of St. Louis County. I left phone messages for John Geiler and Mike Hite (whose name is on the notice of violation letter). I requested a personal meeting with John Geiler so I can tour the property with him and show him the problems. I sent a copy of the letter to my attorney requesting legal assistance. I also sent a link to this update to the Great Rivers Environmental Law Center, Stream Teams United, River Des Peres Watershed Coalition, Environment Missouri, Open Space Council for the St. Louis Region, Deer Creek Watershed Alliance, Missouri Coalition for the Environment, and Great Rivers Greenway.

“Hi, I really appreciate your call yesterday. This letter is being copied to Mike Hite and John Geiler of St. Louis County, and will be published here shortly:
www.chasenfratz.com/wp/st-louis-county-harassing-us-again/

Here, as requested, is what it says in the notice about the exact violation.

“Violation 1 302.2 Grading and Drainage. Health Related. All premises shall be graded and maintained to prevent the erosion of soil and to prevent the accumulation of stagnant water thereon. REMOVE THE LANDSCAPING ALONG YOUR FENCE WHERE THE WATER CAN FLOW AS IT WAS DESIGNED.”

Mike Hite, who is the inspector listed on the notice, called me this morning and let me know that he received my email. In his message he said that people always block the water from the other yard. He assumed we did that, but we did not do that, the water was not blocked but facilitated in the flow from her yard to ours. Just because other people do it, it does not follow that that is what we did.

I don’t know why no one from the county will look at the actual property, look at the pictures I’ve provided or the videos to see the following.

Water was on both sides of the fence before I did anything. Photos are in my first article with dates on them showing this. I can show you on my phone to show when I took the photos and did not fake the dates on the graphic. Here it is:

The flow of water from her property to ours probably worked fine in the 1950s when these homes were built. Here is what happened. Over the years, lawns on both sides got mowed over and over, but you can’t mow the actual fence line. Over the years, plant roots and organic matter build up along the fence, creating a high spot along the fence line. This trapped water on her side. At the same time, repeated inundations of water in both yards, and nothing planted in the yards in the affected area except turfgrass, caused the soil to be compacted in the areas that collect water. Turfgrass is not a very permeable surface especially if maintained for decades in a way that depletes the soil. So the problem the county says we caused was pre-existing.

Over the years, apparently more of her yard was paved causing runoff to have to be dumped into a smaller area of soil than the drainage was originally designed for, exacerbating the problem further. I can’t return the property to the original configuration it was designed in because the property next to us (7409 Rockwood Dr) already altered the dynamic decades ago causing much damage to the soil and altering the original drainage forever. When these houses were built they did not design the situation to still be sustainable 70 years later. We know a lot more about landscaping and how it affects water and soil than we did in 1954. Even if I could return the landscaping in both yards to it’s 1950s state, the problem would occur again over time. My landscaping is designed to be sustainable because I’ve used the knowledge we now have in the 21st century to make it so.

When I first built the raised bed along the fence line, the neighbor thought it was ugly so she complained that it was trapping water on her side. I don’t know if that was true or not since water was already trapped on her side before I did anything. Nevertheless, I knew that was not a desirable outcome and having no inclination to damage her already unattractive yard and feeble turfgrass further I took steps to make sure that does not happen. I removed the bricks in the low spot, removed the bricks along the back edge of the bed (solely because she told me she thought they were ugly, I replaced them with fine black mesh that is less visible and also more permeable just in case), made my collection area on our side larger and lower than her side, and now her yard drains completely. That is not all I did, you have a full list from my previous article, but those are the major things.

Her yard didn’t drain completely BEFORE we changed anything. I have checked it after each and every rain (other than when we were in Yellowstone last summer) to make sure (edit after sending) it does now. We IMPROVED the existing problem rather than causing it as we have been accused of doing.

Here is a link to an image that has been available to the county since July 2019.

Mike said in his phone message to me that he could not find one of the drainage pipes that is closer than 10 feet when he came to our property. I question whether the inspectors actually get out of their trucks to look because I witnessed one in May (the 2nd) doing an inspection without even stopping the truck all the way. This diagram shows clearly where to look for the pipes. I actually left one off when I made this diagram – there is one more at the north edge of the carport that I didn’t notice when I made this. Yes it’s hard to see everything at first glance, but it’s my opinion that if you are citing someone for a violation that has already been dropped in the court once, shouldn’t you be certain about these things? There is a real economic cost to me having to spend time fighting this over and over when it has been fixed since May 4. I’m partially self-employed and when I’m working on this I’m not earning money. I have plenty of proof in photo and video. I am willing to show it to a judge if that’s what it takes. Why can’t the inspectors look at the actual evidence when it’s been provided over and over again? That’s the part I can’t understand.

Here is the second pipe that is closer than 10 feet from our property (right photo). 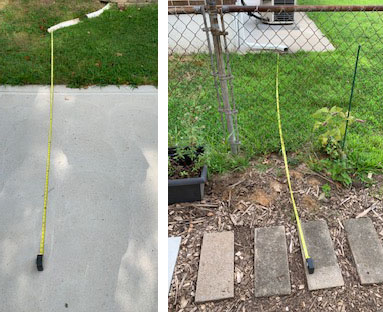 This image was provided to the county in August 2019. The tape measure is shown extended to 10 feet. The pipe has not moved since I took this picture. I don’t understand why the inspector could not see it. You are welcome to come and measure it, don’t take my word for it. Are you not allowed to walk beyond the gate? That I understand. There is no lock on it, but if you are not allowed to go beyond that explains this whole mess. Please make an appointment with me and I’ll show you everything in person. This offer of a tour has been on the table since August 2019.

I also offered soil, fertilizer and grass seed to the neighbor at NO COST to repair the water damaged spot in her yard. I would even install it for free if she wanted me to. We did not cause the damage, it was caused by outdated landscape management practices that are harmful to the soil quality over time. But it’s in both of our best interests to improve the appearance of her lawn and if she believes we caused it I’m happy to fix it. I physically extended with my actual arm an actual bag of grass seed that I bought for her and showed her a pile of soil that we ordered from St. Louis Compost and offered her a share of it to revive her grass. The grass seed I offered her has roots up to four feet long which will help greatly in reducing her soil compaction and helping it absorb water. You cannot buy this grass seed in big box stores. She turned me down flat. The grass on our side of the fence is fine, even in the spots that flood all the time. It’s good enough that a client of mine bought plugs of it from me last summer. I’d love to tell this all to a judge, believe me, so I have no fear of being taken to court again. If you think that is a threat to me (the phone call made sure to include that), after reading the above I’m sure you can understand why it is not.

Thank you for your time.”

I have not heard from anyone except MSD since my last update. Here is  copy of a letter I have just sent to John Geiler of St. Louis County who supervises the inspectors.

“Hi, I’ve attached a photo that I took this morning. With the water frozen, it’s easier to see where the wet spots are. You can see where the fence is. The top portion is our neighbor’s yard. The bottom portion is ours. This is the low spot in our backyards where water flows from one yard to another. As you can see, we are not trapping water in her yard.

I don’t know why she keeps falsely reporting that we are. I don’t know why your inspectors keep falsely reporting that we are. I can speculate but don’t know for sure. I have contacted my attorney to find out how to put a stop to this. It’s been going on since May. I have blind copied him in on this email and I will be publishing this letter on my blog shortly so no one  can claim you have not been kept fully informed through each step.
Here is the blog:
http://www.chasenfratz.com/wp/st-louis-county-harassing-us-again/
How do we put an end to this?
Thank you,
Carolyn Hasenfratz Winkelmann”
Here is the photo I attached: