Some raku pieces of mine were recently fired and I’m pretty excited about the results. Raku firing as practiced in the studio where I take classes is an adaptation of an ancient Japanese method that can yield some very exciting glaze effects.

Most ceramics are heated and cooled slowly during firing to prevent breakage. Raku firing is different – the pieces are subjected to extreme temperatures during firing. They are heated rapidly then yanked from the kiln red-hot with metal tongs and placed in a pile of sawdust on the ground. More sawdust is heaped on top, which catches fire instantly, then a metal trash can is inverted over the pile to hold in the smoke and create what is called “reduction”. 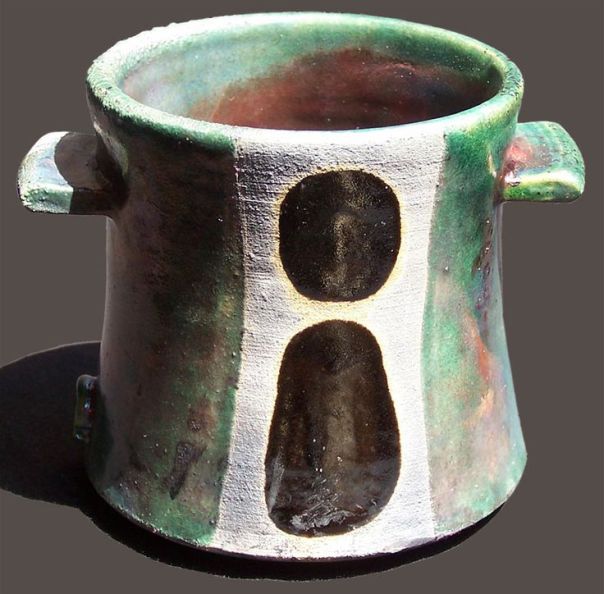 Reduction creates an oxygen-starved environment by overloading the air mixture with carbon. Any exposed clay surface will turn black from the carbon, wonderful effects can be created by leaving areas of the surface unglazed to take advantage. The carbon will also bring out unusual effects in the glazes. For example many glazes containing copper will be green in an oxidation environment but turn red or metallic when reduced. One of the best things about Raku pottery is the unpredictability of how the glaze will turn out. The sawdust covering is variable and random and causes striking “flashing” of colors on the finished piece. There is usually a sort of carbon haze over the glaze after the piece is fired so the next step is to decide how much of that patina to remove. Most pieces look better with as much scrubbed off as possible, some look better with minimal cleaning. Because of this, the patina on Raku pieces can sometimes be fragile and that is one reason why Raku pieces are not recommended for uses that require a lot of washing, such as for food and drink. 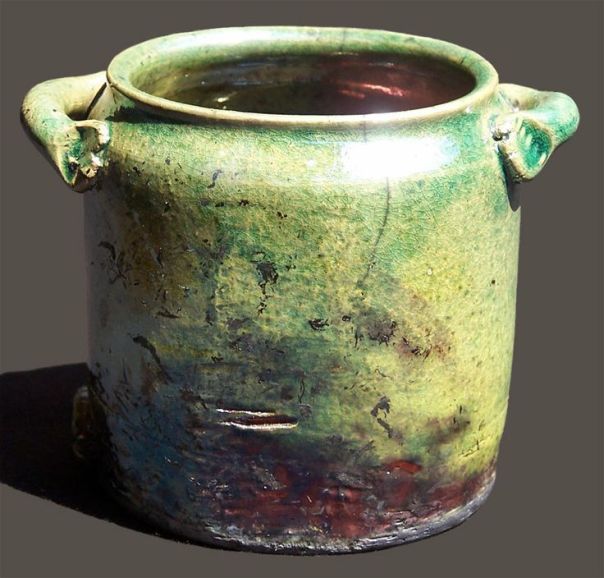 Another factor that makes Raku pottery unsuitable for food and drink is that the rather violent firing process usually results in cracking or crazing in either the clay body itself or the glaze or both. The cracks are greatly enhanced by black carbon deposits that bring them into prominence. In Raku pottery, such cracks are not considered a fault unless they threaten the structural integrity of the piece – they are a desired decorative effect that helps instantly give an aged and venerable look. It is not desirable to store or consume food or drink from such a container because the ability to hold liquid might be compromised and the cracks can collect dangerous bacteria. Raku glazes may be softer and thus more prone to leaching chemicals into food than other glazes. Even if there is no lead in the glaze there may be metal oxides or other substances present that should not be consumed. Also, handles and other parts may not be able to withstand the loads that more functional pottery can take and you don’t want to risk burns by filling such a container with hot liquid. 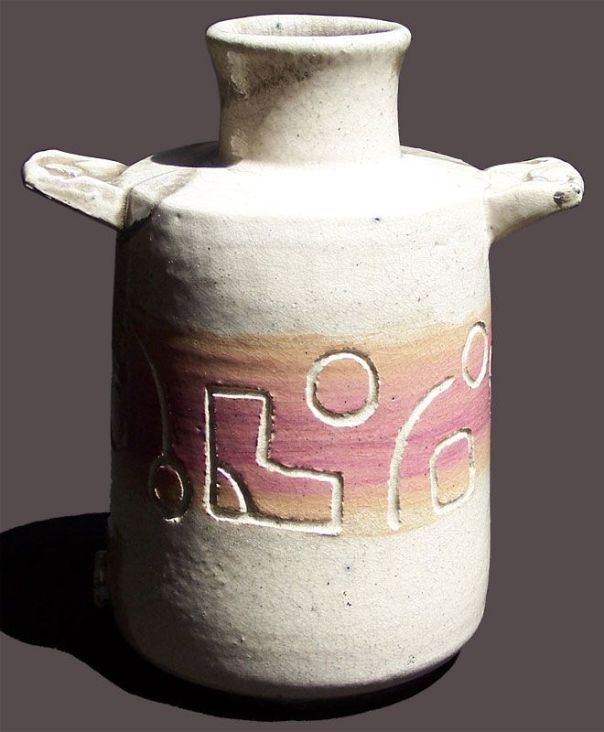 Due to the temperature extremes in this firing process, ordinary clay bodies normally cannot be used in Raku because they will shatter. Raku clay is usually more porous than most due to additives added to withstand the temperature shocks and can be more fragile. Raku pottery should be considered decorative rather than functional, although Raku vessels often make very good planters. Most potted plants thrive with good drainage and porous clay is a good quality in that case rather than a problem.

Here are a few articles to look at if you want more information about Raku: 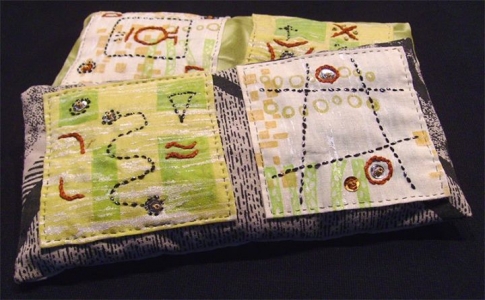 Hand sewn eye pillows filled with sleep-inducing herbs. Pillows are
constructed with flaps that snap in back to make them easily refillable.

Fabric squares on front are rubber stamped, then appliqued and embroidered. Made from recycled fabric by Carolyn Hasenfratz.