Yesterday my husband Tom and I attended the last day of the Gauguin exhibit at the St. Louis Art Museum, Paul Gauguin: The Art of Invention. Our friend Mike went with us and treated us to the tickets that he had earned from doing volunteer work.

When I first became interested in studying art, I wanted to be a painter. When I took ceramics and printmaking for the first time, I lost interest in painting and stopped reading about it as much as I used to in favor of my new passions. Over the years I also have done some pretty intense study of fiber arts, various crafts, collage, Dadaism, neo-Dadaism and Mail Art, ‘Zines, book arts, Outsider Art, Pop Art, photography, computer animation,  web design, architecture, graphic design, the decorative arts, archaeology and anything Mid-Century Modern. Impressionism and Post-Impressionism were the first kinds of painting that drew me in but over the years I came to prefer Surrealism and Abstract Expressionism as painting styles. I hadn’t done any reading on Gauguin for a long time.

If you missed the show you can listen to the audio presentation and view some of the images here:
https://www.slam.org/audio/paul-gauguin-the-art-of-invention/

Here is a transcript of the audio guide for the show:
https://www.slam.org/wp-content/uploads/2019/06/gauguin-audio-guide-transcript.pdf

I really enjoy artists and designers who work in a variety of media, such as Alexander Calder, Henri Matisse and Frank Lloyd Wright. A lot of times I feel guilty about having so many interests and dabbling in so many different occupations and areas of study. Today’s society seems mostly to expect you to do only one thing but that is not and never will be “me”. So at this Gauguin show I was very intrigued to see some of Gauguin’s ceramics, wood carvings and woodcut prints alongside the paintings. There were ceramics and decorative objects from Gauguin’s personal collection as well as Oceanic and Peruvian art that was representative of the cultures Gauguin was influenced by. He was also at various times a sailor, a stockbroker and a writer. People like this make me not feel so weird!

As a former ‘zine publisher (Lime Green News 1991-1998), I was excited to see a woodblock print graphic in the exhibit that Gauguin carved to help him publish his own newspaper, which could be considered a type of ‘zine. I’m currently taking a Mass Communications class and in our textbook Mass Communication Theory: Foundations, Ferment, and Future by Stanley J. Baran and Dennis K. Davis, I’ve highlighted a very intriguing sentence: “Extremists were often forced to rely on older media like pamphlets, handbills and political rallies.” I don’t know if Gauguin would have been considered an “extremist” in his time but he was critical of religion and government and his lifestyle was, to put it politely, pretty “bohemian”. When I read the above sentence in my textbook I thought of the history of self publishing and the many forms it can take. Before movable type printing presses, documents were hand written or perhaps laboriously printed with hand-printing methods such as stamping and wood block printing. Later there were typewriters, carbon paper, mimeographs, copy machines, desktop computers with printers and the World Wide Web, making self-publishing easier and more accessible.

When I was ‘zine publishing, I used to make my originals on paper to be copied on a copy machine at the office supply superstore. I started out with text printed out on an inkjet printer on my 1983 Commodore 64 computer, which I used for all my word processing until 1995. I essentially made big collages for my pages, combining the printed text with a variety of graphics, collages and hand-drawings. If I wanted to add color I would sometimes carve a rubber stamp and stamp it on the finished prints. I think the largest edition I ever made of my ‘zine was 100, so stamping 100 times to add a bit of color was feasible.

I got a Windows computer in 1995 with a black and white laser printer. At that time I got Internet access for the first time and started reading on the World Wide Web. My first web site went live in 1997. Gradually I made my ‘zine using more modern desktop publishing methods and by learning software such as the Microsoft Office suite, Corel Draw and Photoshop. The last years of my ‘zine incorporated more and more “modern” techniques but were still made as big collages with some hand-embellishments before copying. In 1998 I just switched my ‘zine content over to my web site, which although a bit out of date in spots is still live (www.limegreennews.com). It needs some (ok a lot of) work because I’ve been neglecting it in favor of the blog you are reading now.

Publishing online is very satisfying, but I miss the lower-tech, handcrafted methods of self-publishing sometimes. I still like book arts in various forms. I’d like to write about or engage in some self-publishing as I work on my master’s degree if possible. It’s been on my mind ever since reading that sentence in the textbook. I got out some of my old ‘zine originals to go down memory lane and think about some possible research ideas. ‘Zine publishers do a lot of trading and I had a big collection of other people’s ‘zines plus material they sent me for consideration for publication. I donated the bulk of my collection to the Poetry and Rare Books collection at the University of New York at Buffalo some years ago but I did save a few things I especially liked. I have no idea what they kept of my collection if anything, but they did have a subscription to my ‘zine when it was in publication and I didn’t know of anyone else who might be interested! I didn’t save much of the “extremist” stuff for my own collection because it frankly scared me and was one of the reasons I dropped out of the printed ‘zine scene – it helped contribute to a major anxiety attack that I eventually received treatment for and recovered from. I don’t think I’ve ever said publicly why I dropped out of the ‘zine and Mail Art scene suddenly but that is a major part of why I did that. I do miss aspects of it though. I’m kind of hoping that working on my degree will bring opportunities to do some research on this era of communication or even get back into it in some way. I might even re-publish on this blog some things that are not too embarrassing that aren’t yet online. We’ll see! 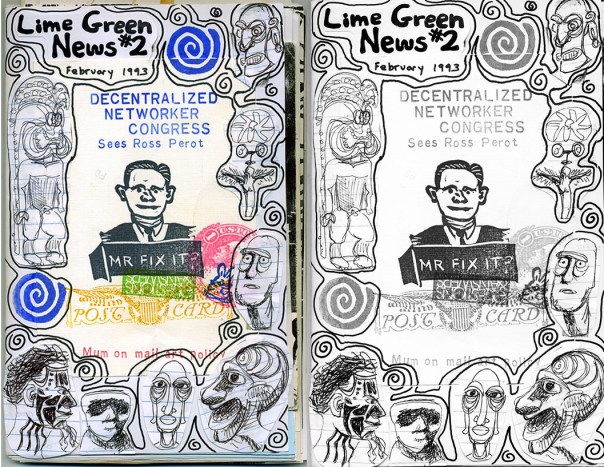 Just for fun, since the art show I just saw included Oceanic art and some work by Gauguin that shows how he was influenced by that art , here is what the cover of Lime Green News #2 looked like. I took a postcard with rubber stamped art work that I liked from another mail artist and taped down some sketches from my then-current Oceanic art history class. I drew and stamped crudely around the sketches and the postcard to make a cover. On the left is my original, on the right is a simulation of what the cover would have looked like after copying it on a black and white machine at the office supply superstore. I don’t know if I even have a printed version of this issue in my archives, I probably just have the original. At that time, if my memory is correct, I used to print about 10-15 copies just to trade with people.

What do Ross Perot and Oceanic art have to do with each other? I had no idea then and don’t now, but one thing I have not ever grown out of is making collages out of random things. Now I call it Art Journaling and use it as one of my artistic outlets since I don’t really try to make “Fine Art” type art any more. It’s not that I don’t have plenty of ideas, I do, I just don’t see what good it would do for anybody. But I never know what older ideas I’m going to go back to!