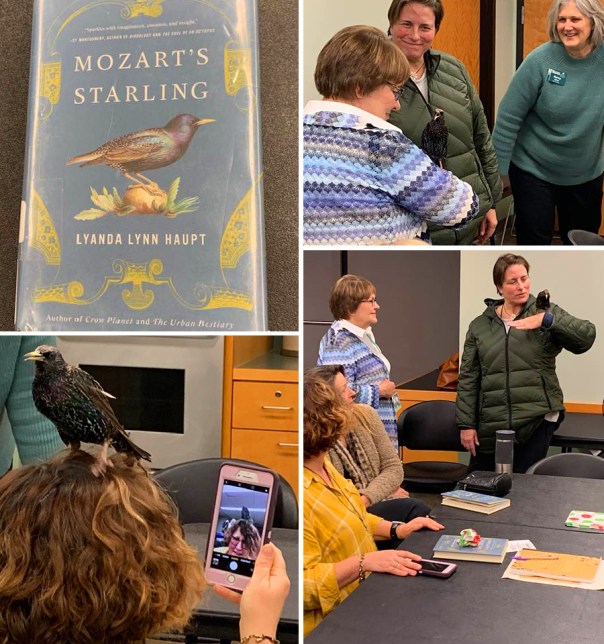 Pooky is one of my two pet European Starlings. I adopted him in 2011 at three months of age. When I heard that the Master Gardener Winter Book Club was meeting at Missouri Botanical Garden to discuss the book Mozart’s Starling by Lyanda Lynn Haupt I offered to bring my starlings so that the attendees could meet a real-life pet starling and see how they interact with people. I ended up only bringing Pooky because Attila and Pooky started fighting when they were put in the travel cage. Pooky is slightly prettier (sorry Attila!) and sings more so he is the one I chose to bring.

It went better than I expected! Once he had some time to settle in, Pooky was not intimidated by being around a large group of people he didn’t know. He sang and talked for the group with gusto, giving a good demonstration of how tame starlings sound when they imitate human speech, whistle tunes and make starling-only sounds. I haven’t read this particular book but I have read a lot of articles on Mozart and his starling and I am familiar with the rudiments of that historic bird’s story.

Besides the book itself, we discussed specifics of starling biology and behavior and talked about the implications of invasive species. Other topics included bird behavior in general, bird conservation, avian language abilities and intelligence, experiences with unusual pets and other related topics.

After the discussion I gave Pooky some “out” time so that those who wanted a closer encounter could let Pooky land and sit on them for a bit. Both of my birds will readily land on people they don’t know and Pooky did not disappoint on this occasion. My starlings love attention and judging from the avian and human interaction I think members of both species enjoyed the encounter.

Some resources if you want to learn more about starlings:

My photo album of Attila and Pooky

Some videos I took of Attila and Pooky

Previous articles I have written about European Starlings

Help! I’m Being Predated by a Starling! – great video that shows what the starlings’ prying behavior looks like.

It’s Ok to Hate Starlings – I disagree with this opinion, and I said so in the comments, and the abuse that resulted I think is very educational. Do you think there is a connection between human and animal abuse? Read the comment section and see what you think. I got very involved in this discussion because I was testing a hypothesis about abuse.