In the days before air conditioning, one way people used to cope with the heat was by visiting swimming beaches at the numerous rivers in the region. Caves were popular too. Route 66 fans will recognize the names of the fun places “Times Beach”, “Sylvan Beach”, Meramec Caverns”, “Stonydell” and Joplin’s “Lakeside Park”. Fort Bellefontaine County Park was formerly such a destination – the area that is now Castlewood State Park was another.

According to the book “Walks & Rambles in and around St. Louis” by Robert Rubright, the heyday of Castlewood as a resort was from 1915-1950. The swimming beach was washed away by the river in 1945. Some other amenities such as clubhouses, nightclubs and taverns persisted a bit longer. The state of Missouri converted the land to a park in 1979. Signs at the park indicate that while swimming in the Meramec River is not forbidden, it’s not encouraged either and is something to undertake at one’s own risk. Drownings do occur here so be careful.

The River Scene trail is so nice that I have explored very few other areas of the park despite many visits. I need to correct that oversight! There is a steep climb to the top of the bluff but after that the trail is not too difficult because it is mostly flat or downhill. You will have to watch your footing because the trail is rocky in spots and it’s possible to trip on tree roots. Sturdy hiking boots and a walking stick are helpful for safety and comfort. There are multiple scenic overlooks, historic ruins from the resort days and a well-traveled railroad corridor to see along the way. Rail fans will normally get a chance to see a train or two while hiking here and a portion of the trail even goes under the railroad bed in a cool tunnel. 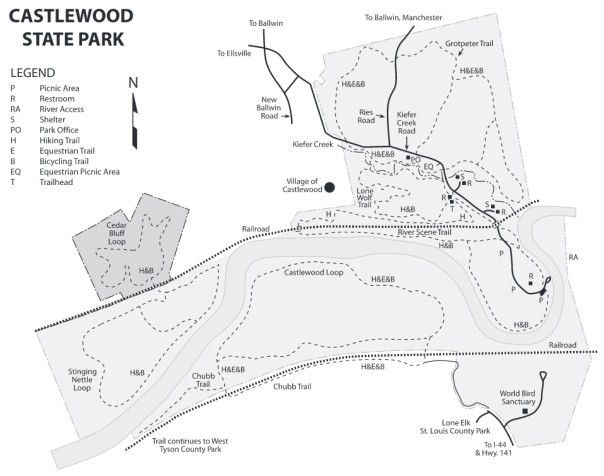 As you can see from this map, the portion of the park that is South of the Meramec River is accessible only by hiking, biking or by horseback. You can take a trail to Castlewood from either West Tyson County Park or Lone Elk County Park.

It’s not shown on this map how it connects but if you take the Stinging Nettle Loop at the base of the bluff, you can follow that trail westward to a portion of the Meramec Greenway, Sherman Beach County Park and the Al Foster Trail which begins in Glencoe. You can also take a side trip on the Rock Hollow Trail, also known as the “Zombie Road”. The Stinging Nettle Loop is great for mountain bikers like me who are pretty much at the beginner level. There are some hills but they are not too high and if you fall you’ll probably land on dirt most of the time. I took a minor fall and didn’t get hurt. More challenging trails that I have not worked up to trying on a bike yet are in the area if you’re up for it. If you are getting the impression that you can spend days or weeks here exploring all the trails that connect near here you are probably right! Bring maps because it can get confusing!

The Interstate 44 / Historic Route 66 corridor southwest of the St. Louis, Missouri metro area is an embarrassment of riches for outdoor enthusiasts. Opportunities for bicycling, hiking, boating, camping, fishing, bird watching and many other outdoor activities are easily available to Route 66 enthusiasts who want to take a healthy break from driving a motorized vehicle. Route 66 State Park is a must-see for the Route 66 fan but there are abundant other interesting choices for outdoor recreation in the area, many with historic connections to Route 66. Route 66 State Park is a great choice for flat walking and biking trails. If you’re in the mood for some hills, take a look at West Tyson County Park. You’ll see the entrance to this park on the way to Route 66 State Park if you take the Lewis Road exit (#266) off of Interstate 44. 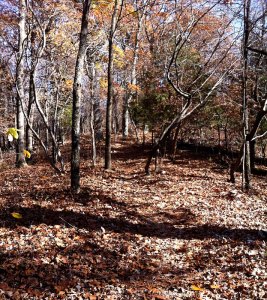 Last weekend I parked at the trailhead for the Flint Quarry Trail loop and started my hike. It was supposed to be about three miles, but there are lots of connector trails to other trails and other parks in the area and I was on another trail for some of the time and ended up hiking just under five miles. All the connectors make this trail kind of confusing, so be sure to have a map with you when you set out. Some of the twists and turns on this trail are extreme which makes it pretty easy to see where you are on the map. Without a map I would have felt apprehensive and it’s possible I would have gotten lost. While the trail is hilly and rocky, the switchbacks are really well done and the climbs tend to be broken up into short segments so I didn’t find it overly strenuous. Besides a map and your normal hiking safety gear, I recommend at least two bottles of water – more if you have room, in case you get off the trail – hiking boots with ankle support and a walking stick to make this hike comfortable and safe. The trails in this area are used by mountain bikers and horseback riders, so be alert and give them room to pass.

The main natural attractions on this trail are scenic views from the ridge tops, beautiful forest and intriguing rocky outcrops which were once mined by Native Americans to make stone tools. If you’re into the hobby of letterboxing, there are some man-made attractions here too for you to try to find. I searched for four letterboxes during my hike and actually found one. That’s typical of my usual ratio I must admit! 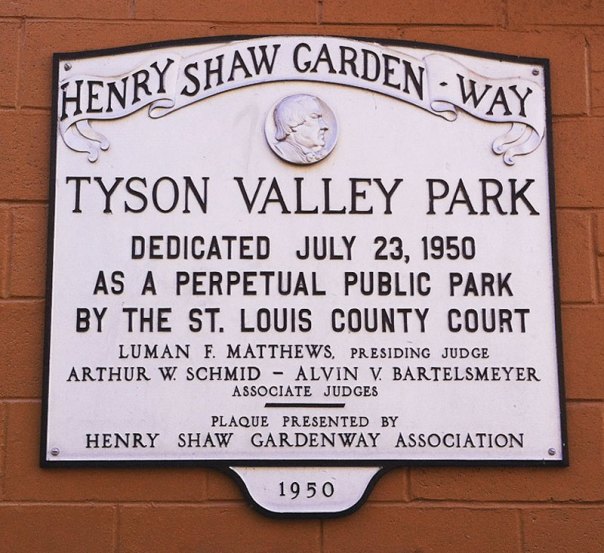 On the restroom / shower building at the trailhead is mounted this commemorative plaque which marks the transfer of ownership of a portion of the park land from the Federal government to St. Louis County. Like many parks in the St. Louis area, West Tyson’s history includes military use in WWII. The tract known as Tyson Valley Park was reclaimed by the U.S. Military in 1951 for use in the Korean War effort and repurchased by St. Louis County in 1963. The article “The Tyson Valley Area” by Conor Watkins helps explain who owned what when and is a great overview of the history and recreational opportunities in the area surrounding West Tyson.

The Henry Shaw Gardenway has its origin in the founding of the Missouri Botanical Garden Arboretum, popularly known as “Shaw’s Arboretum” as the garden itself is popularly known as “Shaw’s Garden”. In 1923 Missouri Botanical Garden purchased land in Gray Summit, MO to house plants that were in danger from St. Louis city pollution. In 2000, this land was renamed “Shaw Nature Reserve” and is a great place to hike and view nature.

The Henry Shaw Ozark Gardenway was/is a modern-era organization with the mission of preserving the Ozark foothills along Interstate 44 and promoting maintenance and expansion of the Ozark Corridor series of parks. Their web site is not currently functioning and I don’t know if it’s still in existence. There is a great map of natural resources along the corridor here – Henry Shaw Ozark Corridor.